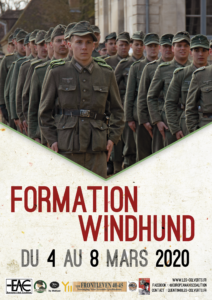 The event will include immersion without audience.
Setting: France March 1944 – Refitting unit.
EAC group is looking to set up quality events and we will choose our participants.
Participation is invite only.
Authenticity of uniform and appearance is of paramount importance.
No modern stuff will be allowed, we don’t want see any cellphones or modern camera (There is no cellphone network on the area – you need your cell for your work ? Don’t come – and there will be a official photographer).

General guideline: This Annual event has a goal to prepare EAC member groups to work together and achieve a high quality during other events hosted by EAC.
You will be in full immersion during 80 hours in a private property with castle, dependances and huge woodland area. Around 50 to 100 participants are able to join.

You will be experiencing a normal day in the life of a panzergrenadier with patrolling, resting, a lot of theoretical classes (learning german hand signal,learning group movement, etc), training and regular army drill (marching practice, grenade throwing, defusing, driving V3000 Ford lesson, etc).
There will be civilians around from the surrounding French villages as well as German autonomous units: Feldgendarmerie, Transmission Unit, Gulashkanone, Feldpost, HQ unit with auxiliary personnel.
Participating in the March Event is to participate in a core event from EAC Coalition vision, high standard and Immersion.
Fees are 100 euros each as we renting a large area. Food is included.

Historic scenario : After the dramatic fighting on the Eastern front. The 16-Inf Div. also known as ‘Der Windhund-division’ had lost most of its fighting value. From March-May 1944 remnants of the division as well as recovered soldiers of the many hospitals were ordered to form a new division in France:

During this event we will portray the first arrivals in Northern France. A mixture of 16 Inf. Div. veterans, men of the 179 Pz.-Div. and new replacements to regain the strength of the division.
With most of the heavy equipment and vehicles left behind in Russia, we are set to be at patrols, refitting, retrain and practice, in order to form a cohesive unit once the Division is ready to be sent to the front.